One of the features I like best about Bill Caraher’s blog are his discussions of journal articles. This is, it seems to me, something that’s extraordinarily useful and easy to do in a blog, but doesn’t find easy expression in other media. Recently I read Joe Shaw’s “Bathing at the Mycenaean Palace of Tiryns” in the American Journal of Archaeology (2012). In the article, Shaw reconstructs the room with the “bathing slab” in the Mycenaean palace at Tiryns, shown here:

Shaw shows that the drilled sockets anchored a wooden bench with wooden panels underneath that slotted into wooden vertical supports. He reconstructs the bath complex (see below) and he then goes on to review evidence for bathing more broadly in the Aegean Bronze Age. 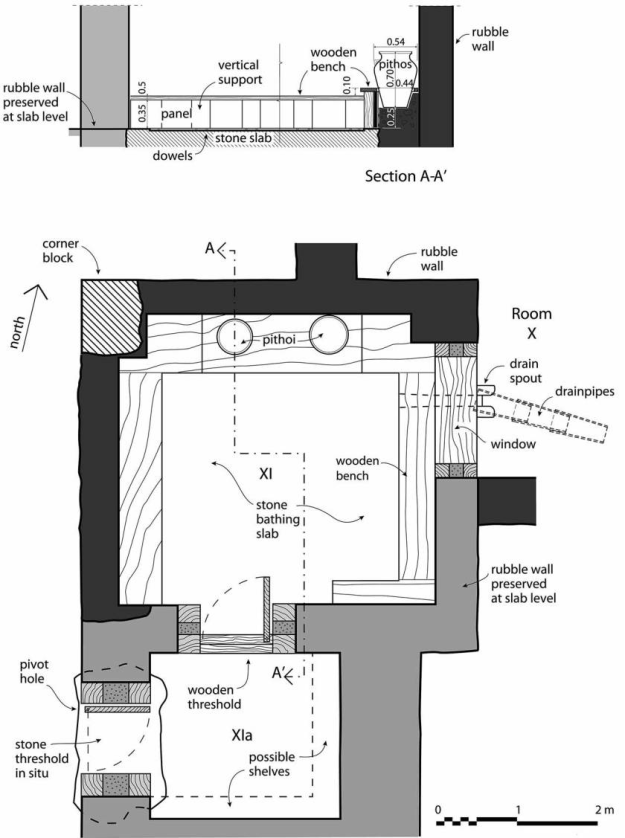 In some ways, this paper is pretty regular. By this I mean that it probably won’t show up in popular media (like, say, the BBC News), and it doesn’t represent an enormous methodological or theoretical breakthrough. But it’s remarkable nevertheless. First, it is a real model of how arguments should be made. Shaw weaves together past interpretations, architectural parallels from other sites on the Greek mainland and the island of Crete, and real common sense to make his argument in only 15 pages of text. Every sentence in his article is necessary, every sentence packs  punch. As a reader, I felt incredibly well taken care of, in the hands of someone who has thought hard and carefully. In fact, I’m sure that this is true. But this feeling is notable because this isn’t something I often encounter. More often, the text feels like an impediment to understanding rather than a guide. Second, it is a great example of an article that requires real mastery of Aegean architecture. It’s not the kind of article that just any Aegean prehistorian could have written. It requires a seasoned eye, one that’s been trained to look for details, and a mind that can rifle through a database of relevant parallels, and to bring them together to come up with a plausible and persuasive reconstruction.

This article has also forced me to reflect more broadly on bathing in the Greek Bronze Age. As Shaw points out, the more one thinks about bathing, the more important it does seem to be to Mycenaean elites. In this, Shaw shows, it is distinctive to the mainland: bathing is apparently not as important on the islands. There are large, well-appointed rooms for bathing at two (at least) mainland Mycenaean palaces: Pylos and Tiryns. Linear B tablets at Pylos record workers that concern themselves with bathing: there are 66 bath-workers (re-wo-to-ro-ko-wo, lewotrokhowoi, cf. Homeric λοετροχόος, on Aa 783, Ab 553; Ad 676 records their sons). The tablets also carefully record palatially-managed production of perfumed olive oil. Whether or not this oil was used in bathing ceremonies — as Shaw shows, it probably was — it is also concerned with care for the body. Shelmerdine (1985) has also suggested that perfumed oil was used to anoint textiles.

Much of the literature on bathing and the Aegean Bronze Age has focused on ritual aspects, such as ritual lustration. Shaw also draws attention to what we might call more practical concerns: care of guests and strangers who entered the palace, hot and dusty from the road, perhaps (Shaw, 555: “journey-worn guests”). But regardless of its ritual import, or its practical functions, it does seem possible that bathing and care for the body was a particular concern of the Mycenaean elite. It may have been strategy whereby some members of the elite distinguished themselves from others. (It’s impossible for me to write this without thinking of that scene in “Monty Python and the Holy Grail.”) Those resident in the palaces would have been particularly well-placed to bathe themselves more regularly and to anoint themselves with fragrant oils produced in palatial workshops. They probably wore special textiles, perhaps those produced by palatial workshops, like the texts at Knossos described as “of hekwetas type” (e-qe-si-jo), and other objects, like jewelry. Thus, Shaw’s article encourages us to see bathing as part of a larger suite of activities by which mainland elites in the Bronze Age arranged their bodily appearance, perhaps as a mode of distinction from those who could not afford to do so. Bathing, however, appears to be a particular concern of Mycenaean elites on the mainland, which suggests that such modes of bodily display were not homogeneous across the Aegean or throughout its history.

1 thought on “Bathing in the Bronze Age”